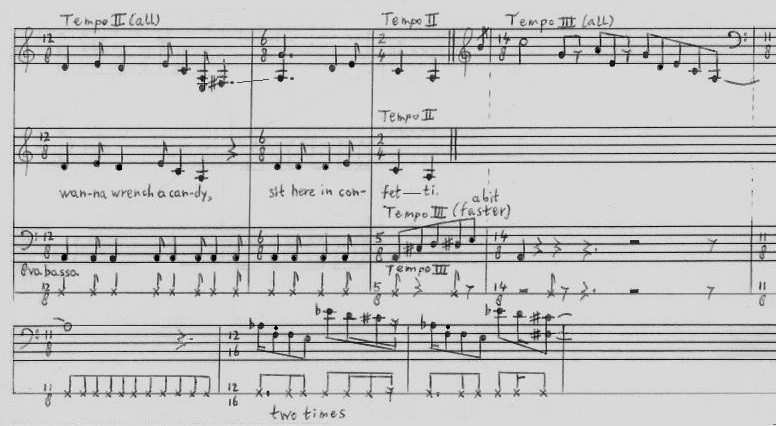 Debra Kadabra, 0:14 through 0:39. Transcription: KS (2nd printed edition, 2001).
In May 2018 Marcel Chrétien sent me the variant below upon the first bar. So I've been relistening with the following conclusions:
- There are some fluctuations in the way this figure is played. It depends upon what bar you're looking at and how precise you're transcribing it.
- In previous editions I took the first G of the guitar riff as the opening note of a bar, but there's mostly a bass drum beat preceding this note and sometimes a faint A by the bass. When you're listening to the opening from the beginning, it becomes more logical to take this bass drum beat as the downbeat, so I've adapted the notation by moving everything to the right with an eighth note. So Marcel's right about letting the guitar part start after the downbeat and right at the beginning it's more like a 16th note than an eighth note after the downbeat. It starts like below, but later on it becomes more like above.

Back to Bongo fury